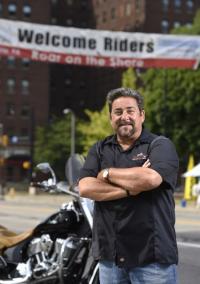 ERIE – Ralph Pontillo, executive director of Roar on the Shore®, a longtime champion for small business and manufacturing, and former president and chief executive officer of the Manufacturer & Business Association (MBA), passed away unexpectedly on Saturday evening, September 7, in Florida where he resides. He was 64.

“Ralph was larger than life, a true visionary, a respected leader and a loyal friend, and we are all deeply saddened and shocked by his sudden passing,” said John Krahe, president and CEO of the Manufacturer & Business Association. “Our hearts and prayers go out to his wife Dana, his daughters Nicole, Amy and Anne, his three grandchildren, and all of his extended family and friends at this most difficult time.”

The MBA is a professional employers’ organization that represents more than 3,000 member companies in the tri-state region. Pontillo joined the Association in 1987 as manager of member services and was responsible for marketing and communications. He was appointed president on April 1, 1990 until his retirement in 2017.

Over three decades, Pontillo was instrumental in the Association’s facility relocation to its present headquarters and construction of its state-of-the-art Conference Center at 2171 West 38th Street in Erie. The project helped expand many of the Association’s programs and services – HR, insurance, government affairs, training, among others – and enabled the Association to become one of the largest regional employers’ associations of its kind in the United States.

In addition to advocating for the business community, Pontillo left an indelible mark on the Erie community at large. He is credited with spearheading one of the Association’s most visible community outreach programs, the annual Roar on the Shore® charitable motorcycle rally. Over the past 13 years, the rally has generated nearly $1 million for local charities while providing an annual economic boost of more than $25 million thanks to its more than 100,000 visitors each year.“Ralph accomplished so many incredible things during his lifetime and his passing leaves a huge hole in our community, the MBA and Roar®, but his greatest legacy was his family,” said Krahe. “He was a true family man and a devoted husband, father and grandfather. We ask everyone to respect their privacy as they grieve.”

Funeral arrangements are not yet available.