“We recognize the value and importance of technical and vocational education,” said John Krahe, president and CEO of the MBA. “These are some of the best and brightest students in our region, and we were proud to give them their moment to shine.”

The Locco Awards, which are named in honor of the late Association Vice President Patrick R. Locco, a strong advocate of vocational education, were created in 1972 (then known as the Golden Watch Awards) with the sole purpose to recognize outstanding high school students who distinguish themselves in the pursuit of technical and academic excellence. To be considered for this prestigious honor, students must apply and be nominated by a teacher. Each school then narrows the nominees to their top candidates. Students are then interviewed by local businesspeople who ultimately choose the winners.

This year, the student winners each received a $1,000 scholarship. 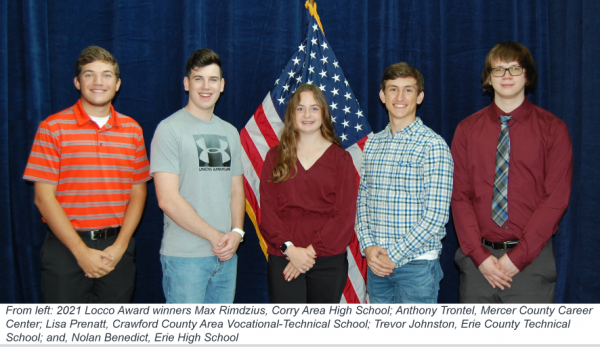 “Our Annual Event is one of our signature events, and we couldn’t be more excited about it,” said John Krahe, president and chief executive officer of the MBA. “Admiral McRaven is an extraordinary leader and his address to our membership is well worth the wait. He has exceptional leadership experiences, and we look forward to hearing his lessons and insights on the force of teamwork and personal initiative, resilience in the face of opposition, accountability and the unconditional importance of never giving up.”

Admiral McRaven joins a long list of renowned speakers who have been invited to give the Annual Event keynote address. He is one of the most decorated and inspiring U.S. commanders and former chancellor of the University of Texas System.

During his time in the military, McRaven commanded special operations forces at every level, eventually taking charge of the U.S. Special Operations Command. His career included combat during Desert Storm and both the Iraq and Afghanistan wars. He commanded the troops that captured Saddam Hussein and rescued cargo ship skipper Captain Richard Phillips from Somali pirates in 2009. McRaven is also credited with developing the plan and leading the Osama bin Laden mission in 2011.

As the chancellor of the University of Texas (UT) System, McRaven led one of the nation’s largest and most respected systems of higher education. As the chief executive officer of the UT System, McRaven also oversaw 14 institutions that educated 220,000 students and employed 20,000 faculty and more than 80,000 health-care professionals, researchers and staff.

McRaven is a recognized national authority on U.S. foreign policy and has advised Presidents George W. Bush and Barack Obama, and other U.S. leaders on defense issues. He currently serves on the Council on Foreign Relations (CFR), the National Football Foundation, and the Board of Directors of ConocoPhillips.

According to his official biography, McRaven has been recognized for his leadership numerous times. In 2011, he was the first runner-up for TIME magazine’s “Person of the Year.” In 2012, Foreign Policy magazine named McRaven one of the nation’s “Top 10 Foreign Policy Experts.” In 2014, Politico magazine named McRaven one of the “Politico 50,” citing his leadership as instrumental in cutting though Washington bureaucracy. In 2015, he received the Intrepid Freedom Award for his distinguished service in defending the values of democracy. In 2016, McRaven was named the recipient of the Ambassador Richard M. Helms Award by the CIA Officers’ Memorial Foundation and, in 2018, he received the Judge William H. Webster Distinguished Service Award for a lifetime of service to the nation.

McRaven graduated from The University of Texas at Austin in 1977 with a degree in journalism and received his master’s degree from the Naval Postgraduate School in Monterey in 1991. He is the author of four books including, SPEC OPS: Case Studies in Special Operations Warfare and Make Your Bed: Little Things That Can Change Your Life and Maybe the World, based on his 2014 UT Commencement Speech that received worldwide attention. His third book, Sea Stories: My Life in Special Operations, released in May 2019, is a memoir full of inspiring and action-packed stories from McRaven's life in the special operations world. His most recent book, published in 2021, is The Hero Code; Lessons Learned from Lives Well Lived.

A sellout each year, the MBA’s Annual Event is the tri-state region’s premier business networking event, featuring the nation’s most prominent figures in business, politics and journalism. Among the most recent speakers are American businesswoman Kat Cole (2019), “Shark Tank” stars Damon John (2018) and Robert Herjavec (2016), and legendary coach Lou Holtz (2017).

ERIE – The Manufacturer & Business Association (MBA), along with dozens of partner and sponsor organizations, will host the 2021 Manufacturing Day (MFG Day) celebration on Wednesday, October 13, at the Bayfront Convention Center, 1 Sassafras Pier. All media are invited to attend.

Please note: Masks are required regardless of vaccination status.

“We are thrilled to host this year’s event in person once again,” said MBA President and CEO John Krahe. “It is a great way for area students to experience the innovation and technology that are happening in our region and to hear the many career opportunities that are available in modern manufacturing.”

From 8 a.m. until 12:30 p.m. October 13, the Bayfront Convention Center (BCC) will be converted into a spectacular display and celebration of American manufacturing and technology, including more than 50 interactive exhibits and displays, as well as educational breakout sessions. An Appreciation and Recognition event will be held at noon in the BCC Ballroom, featuring a special keynote address by Patrick Stimpert of The Matric Group in Seneca, Pennsylvania, as well as the presentation of the 2021 Patrick R. Locco Scholarship Award winners from five area vocational and technical schools.

More than 1,000 students, educators and community leaders from the region are expected to attend the event.